Did you know that when you purchase a Stratford Home or Schult Home that you can tour it as it is built in the factory? You can! Abel and Kara West did just that earlier this year.

Abel and Kara visited Stratford Homes in Stratford, WI while their new two-story modular home was being built. They were able to tour and see the production process. A typical Stratford Homes modular home is built in 12 days and 14 homes are normally in process at once. This provided Abel and Kara a window of time for their visit and allowed them a peek into what their finished home will look like once they arrived.

Thank you Excelsior Homes West!! Such a fun experience.

This is an exciting adventure for the Darwin, MN couple. They previously lived in a manufactured home that they purchased from Excelsior Homes a number of years ago, which they’re trading in towards their new home. Abel and Kara live on a family farm and are excited to upgrade to a Stratford Modular Home that will be customized to their style.

Take a Tour with Abel and Kara

Experience a bit of what Abel and Kara saw while on the tour of their new Stratford home build. 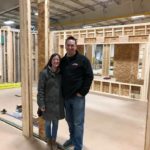 Kara & Abel standing between the kitchen and living room. Their house is in four pieces. A wall in process Kara excited for their new pantry A view within Stratford Homes Thank you to Abel and Kara for sharing this experience with us. We’re excited to finalize their new Stratford Home and get them all settled. Watch for a follow-up story after they  move-in to their new home!

Interested in your very own home Stratford Modular Home?

On June 11, 2017, John and Amy Kaiser’s 130 year old home was struck by lightning. A fire started in the upper level of the house. Repairing their home after the house fire wasn’t the solution the Kaiser family selected. Instead they reached out to Excelsior Homes, and were able to move into a new home on December 1, 2017. John and Amy considered building a new home over the years, but the time hadn’t been right previously. After the lightning strike and house fire they had to decide and move forward with either major repairs to an old home or build something new. They chose to go with something new.

Since they’d considered new home options in the past, they had already visited Excelsior Homes and walked through model homes earlier in the year. At that time they had decided to wait until John had less work commitments. The lightning strike and house fire changed their plans. They needed a place to live and their old home wasn’t an option any more.

The Kaisers considered multiple options before moving forward on their home choice. Besides the option of repairing their home they also looked at other modular home dealers and manufacturers. Constructing a stick-built home was another option. Excelsior Homes kept coming back as their best choice. Ultimately, John and Amy wanted to be living back on their property as soon as possible, and Excelsior Homes provided the most effective and efficient solution.

Deciding on a modular home from Excelsior Homes meant that the timeline was efficient. They were able to create the foundation while the home was constructed, which was a large part of their decision. The Excelsior Homes team guided the project to create the Kaiser home on a compressed timeline, John and Amy appreciated this approach,

“We liked the “one-stop” shop of Excelsior Homes being the general contractor. Beau, Jessica, and Jason were very helpful and easy to work with. We started with a model home design and made modifications to our liking.”

The Challenge of Building a Home on a Timeline

Since the Kaiser home project was unexpected. Their project started when summer had already arrived. They were concerned about getting the home selected, designed, built and completed before winter arrived. There were times when the weather didn’t cooperate, but the Excelsior Homes crew was able to complete the house by the end of November. John and Amy moved into their new home on December 1, 2017.

John and Amy are currently enjoying their new home and when asked what their favorite feature of the home is, they wanted to list multiple things.

“The open floor plan, with many windows, to have spectacular views of our property.  The WARM house as compared to our old home.”

The Excelsior Homes team enjoyed working with John and Amy. We’re happy to see them enjoying their new home and their beautiful property.

Are you looking for a new home solution?

Visit Excelsior Homes model homes to see all the features for yourself.

Due to the COVID-19 pandemic we are requesting visitors make an appointment prior to visiting our office and/or model homes.  Appointments can be made by calling 320-587-4990.

Due to a high volume of information requests we are experiencing longer than normal response times. Please call 320-587-4990 with urgent needs. To help prioritize demand, requests for home builds after 2021 may have an extended response delay.  We value all customers and are working diligently to respond as quickly as possible.  Your patience and understanding is appreciated.